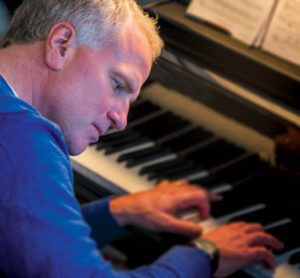 Composer Eric Houghton was elected to and won the ASCAP “Meet the Composer” award in 1993 following the piano debut of his massive Pioneer Songs. Recently orchestrated, the 15 symphonic songs for soloist quartet, choir and narrator, detail the first successful wagon trains to California in the 1840’s. Piano versions have been performed in St. Louis, Chicago and New Jersey, and future orchestral performances are planned.

Upon completing two advanced degrees in Piano Performance, Westminster Choir College in 1984 and Manhattan School of Music in 1987, Houghton began teaching and performing at Westminster Conservatory of Music in Princeton, New Jersey. He continues to teach there, and has performed over 30 solo and chamber recitals throughout the Eastern United States, programming both classical repertoire and his own original works.

Other original works include over 50 songs, including two other large-scale historical works, Victory Songs and Songs From the Cross. He has composed songs cycles on the words of Victor Hugo, William Shakespeare and biblical Psalms, composed dozens of solo piano works and many widely performed church anthems. In 2012 he composed and performed A Musical Program of Recovery, celebrating life free from addiction.

Many of Houghton’s works are published and available at artofsoundmusic.com.